In a season that saw the return to full activity in the domestic game following the pandemic, and a busy calendar for the elite level of the game, we are pleased to have fifteen Award categories this year.

Ulster Rugby CEO, Jonny Petrie commented: “I’d like to extend my congratulations to all the winners and nominees for what has been a very positive season for our clubs and players at both the grassroots and professional level.

“I’d also like to take this opportunity to thank everyone involved in the game across Ulster in getting rugby back in full swing this year. These efforts have not gone unnoticed and I’m very grateful to all of the volunteers and staff for their commitment to the game right across the province.”

The Awards will be distributed to the winners in due course. 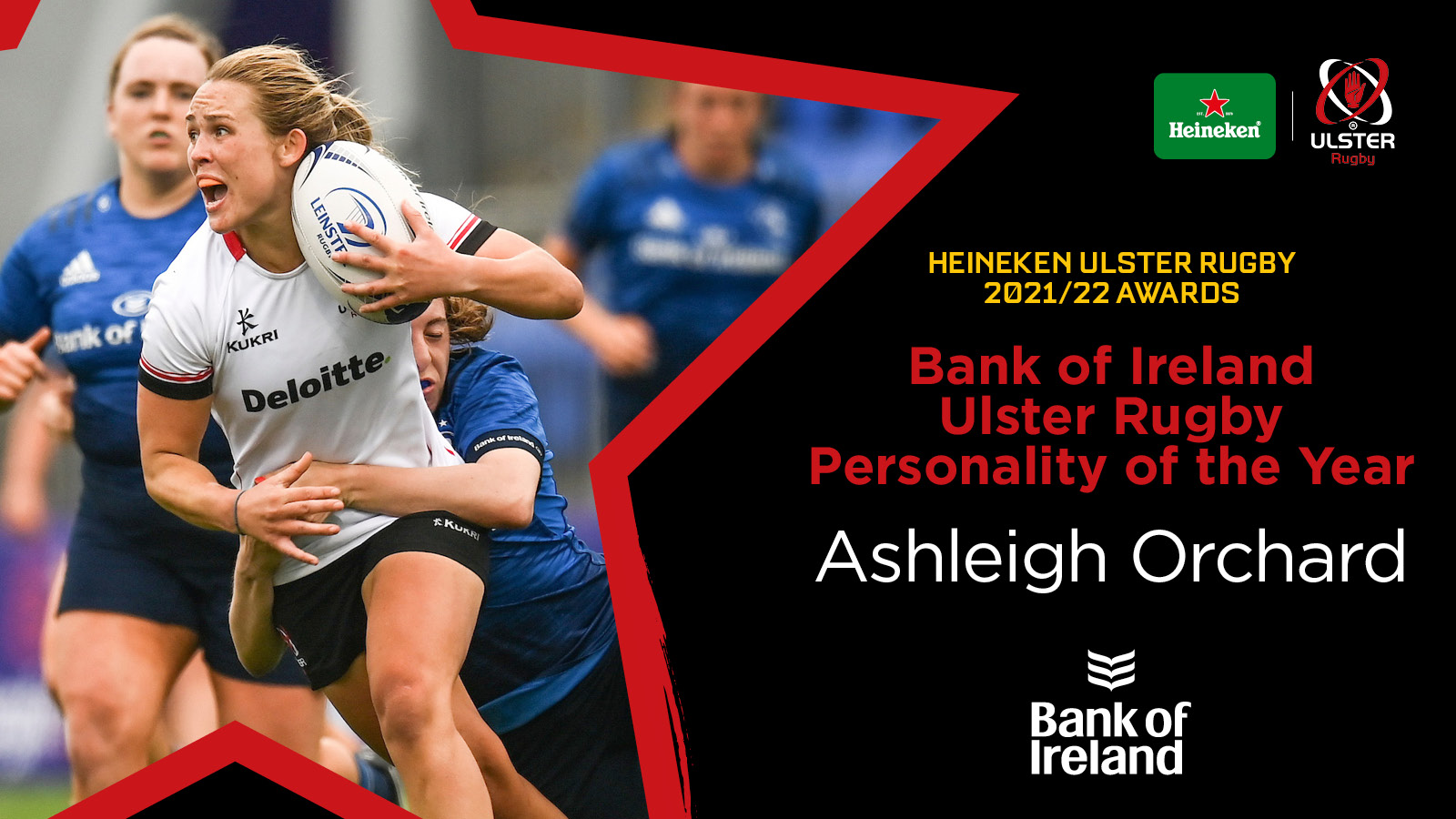 Back-line flyer, Ashleigh Orchard (previously Baxter) made her long-awaited return to rugby this season for both club and province after a lengthy injury.

The 30-year-old has garnered a huge amount of experience at the highest level, making an impressive 87 appearances for Ireland Sevens in the World Series. She also represented Ireland XVs throughout her career, including the Women’s Rugby World Cup in 2014 and 2017.

This season, she has been part of the coaching team for the Ulster Age-Grade Sevens squads, inspiring the next generation of Ulster and Ireland players.  She hasn’t stopped there in sharing her wealth of knowledge and will join the Ulster Women’s coaching team for the 2022-23 season. She will also be taking up a Player-Coach role at her club, Cooke RFC in the All-Ireland League, giving back to the game she has played for the last decade. 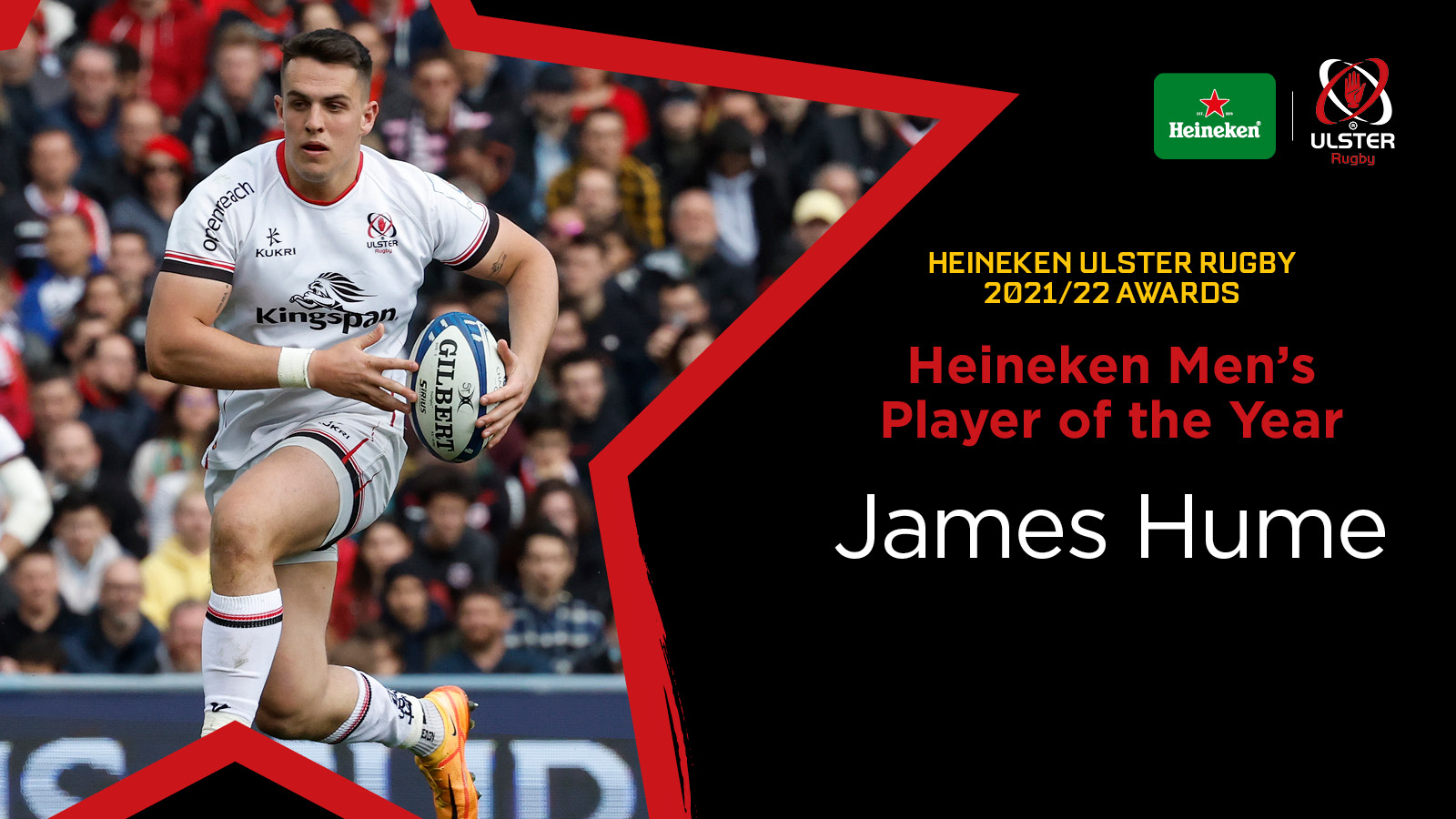 The outside centre has received the majority of votes made by Ulster Rugby supporters to collect his second accolade in the Heineken Ulster Rugby Awards. Hume was directly involved in four tries (1 try, 3 assists) in the URC Quarter-Final victory over Munster earlier this month, equalling Leinster’s Jordan Larmour. No other player has been involved in more tries in a single URC game this season.

Hume caught the eye of Ireland Head Coach, Andy Farrell, and made his Ireland debut versus USA in July 2021, and made his first Guinness Six Nations appearance against Wales earlier this year. His consistent performances have led to his further selection in the Ireland squad to tour New Zealand over the next few weeks. 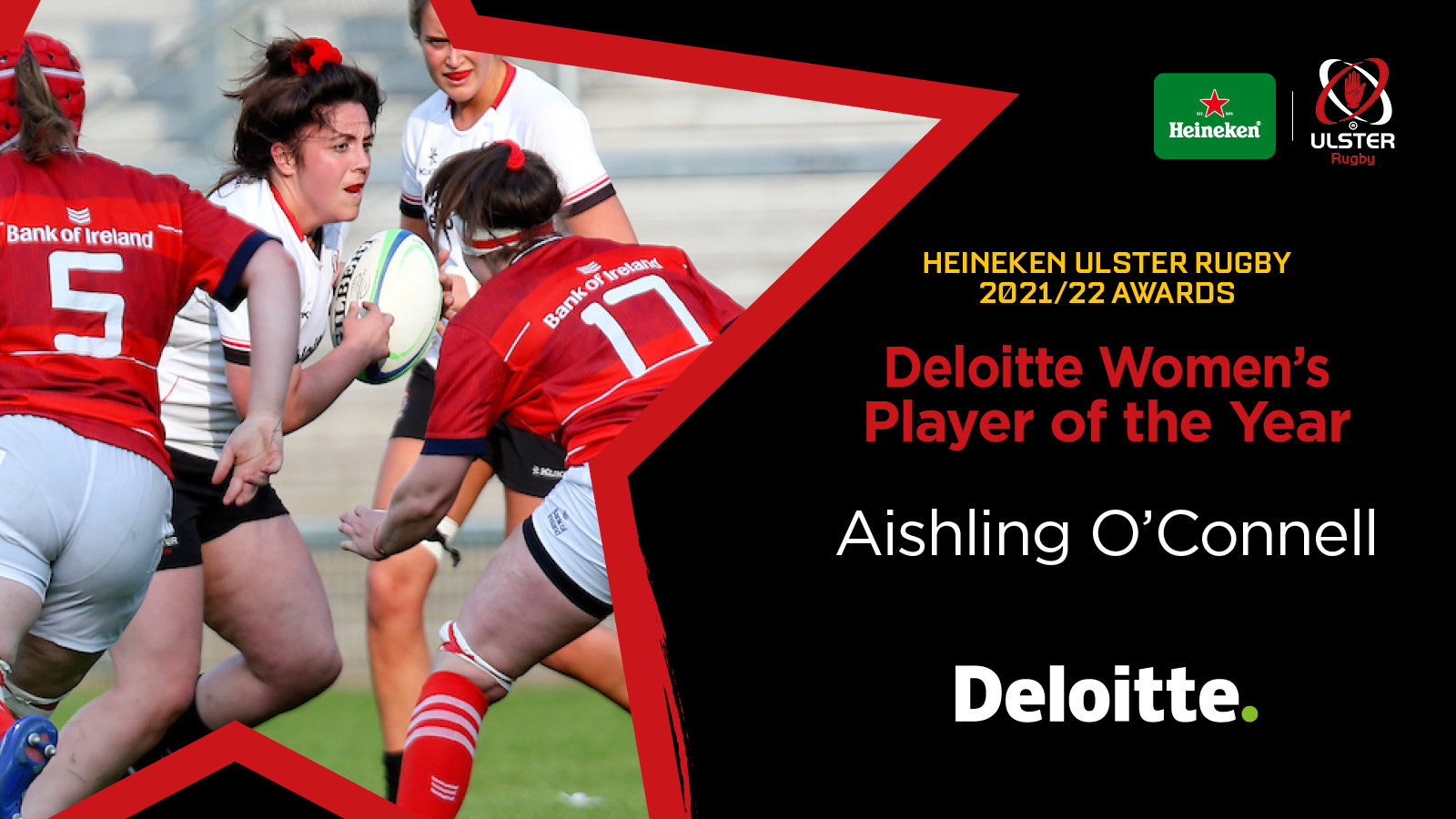 Prop forward Aishling O’Connell clinched the majority vote by Ulster Rugby supporters to be nominated the Deloitte Women’s Player of the Year, seeing off a strong list of contenders. The 32-year-old was consistently prominent in Ulster’s Inter-Provincial Series last September, starting and playing a key role in all three games.

A strong ball-carrier in the loose, and a formidable force in the set-piece, O’Connell has always led by example as Cooke RFC’s captain in the Energia All-Ireland league. 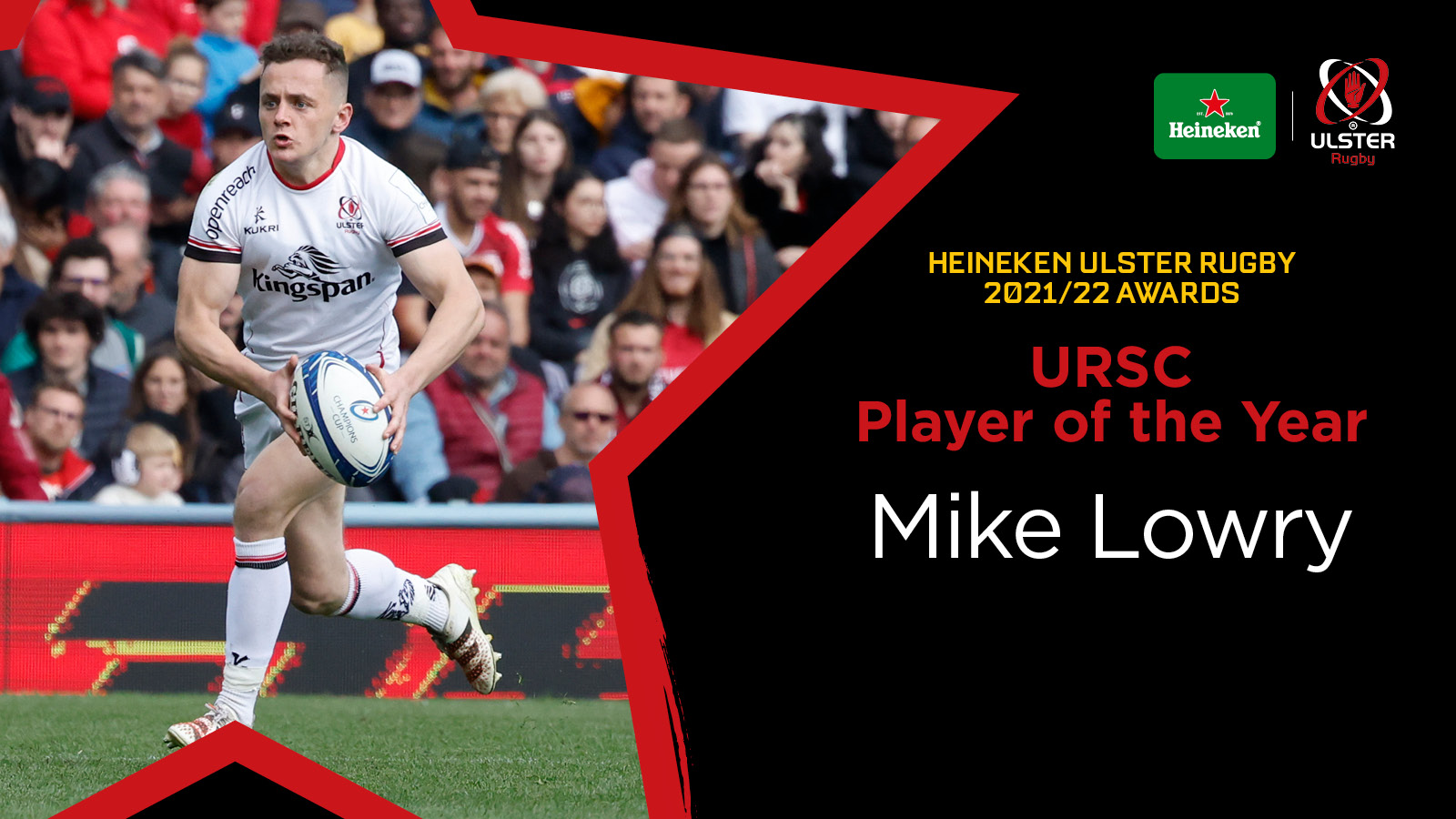 European Player of the Year nominee Lowry has racked up points for the province in an outstanding season in both the United Rugby Championship and Heineken Champions Cup campaigns. He has been selected by the Ulster Rugby Supporters Club as their Player of the Year.

In a season in which he has repeatedly been named among the top players across both competitions, including for metres made and defenders beaten, Lowry also made his brace-scoring Ireland debut in this year’s Guinness Six Nations versus Italy. 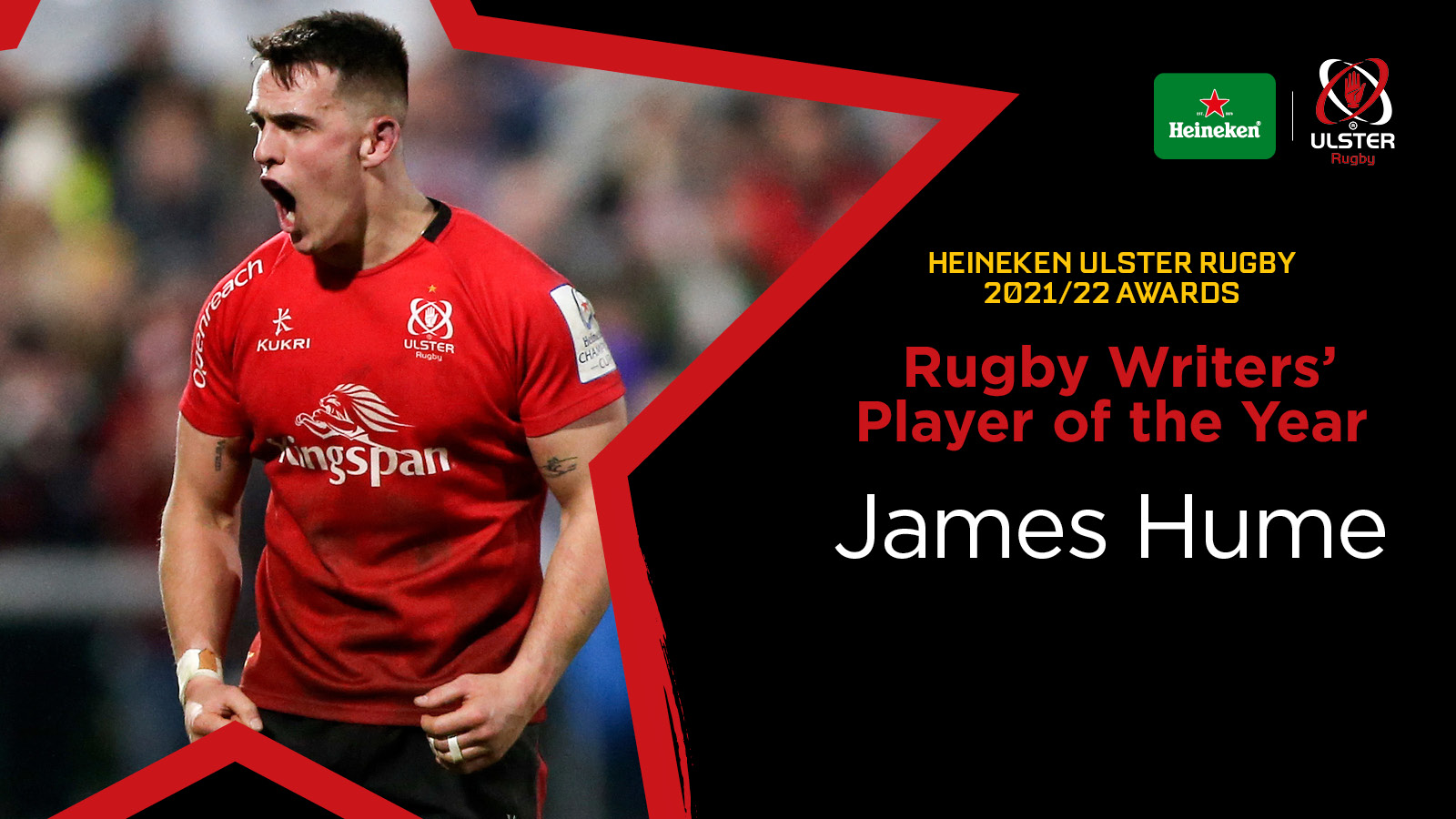 23-year-old centre James Hume has continued to impress since winning last season’s Openreach Young Player of the Year accolade, claiming the Rugby Writers’ Player of the Year Award for the 2021-22 season. Possessing a knack for making clean breaks and beating defenders, Hume is equally adept at shutting down the opposition with his quick line speed and ferocious tackling.

Members of the media commented on his exceptional performances and development this season, as well as his passion and drive representing the province. 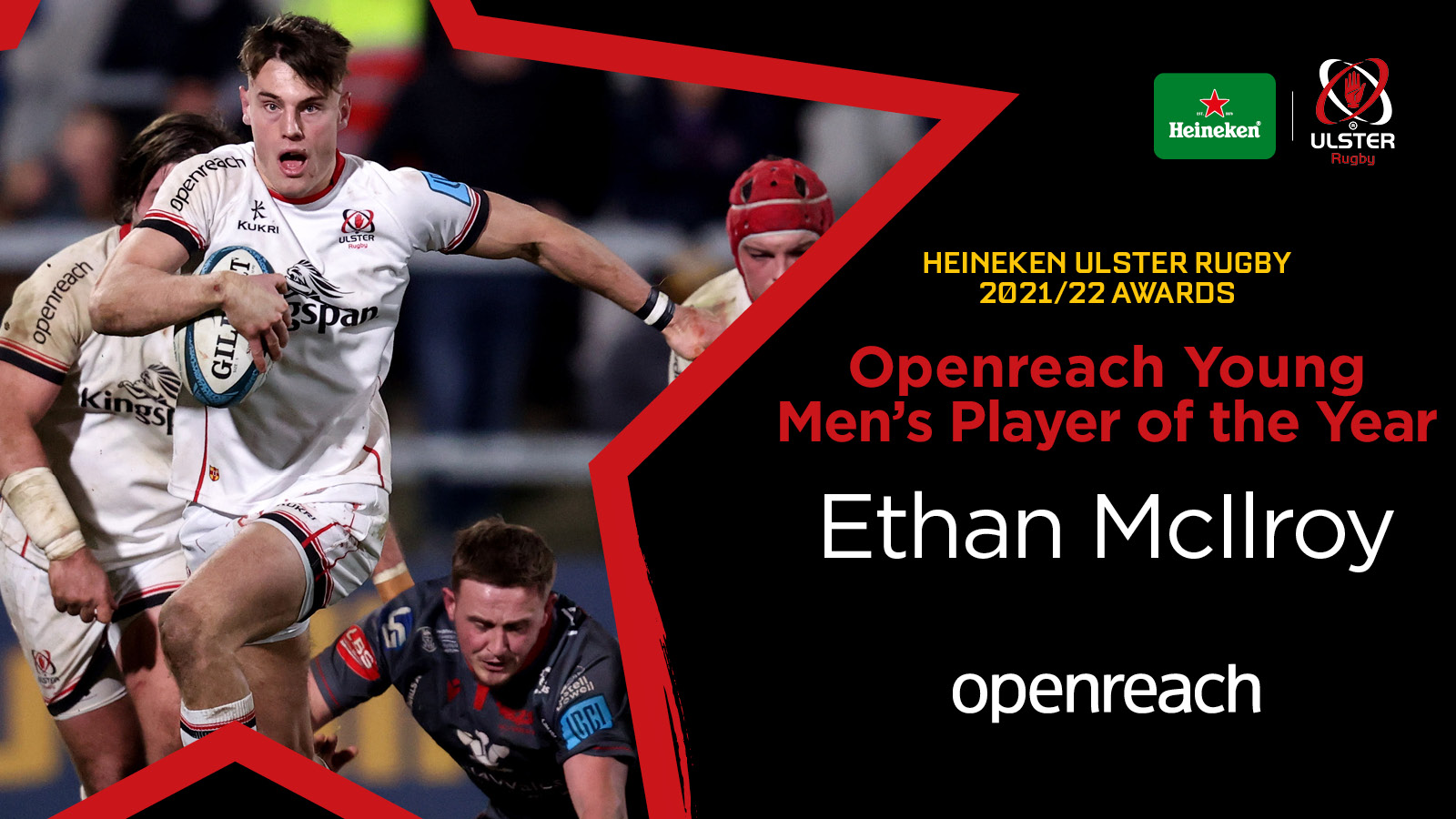 Despite only being 21 years of age, Ethan McIlroy has been an integral part of Ulster’s exciting young back line this season, playing 21 games for the Ulster men and starting 20.

The back three player possesses a lethal step and is a potent attacker, as well as being an excellent reader of the game in defence. In a busy season, McIlroy as made 1074 metres, 20 clean breaks and scored 5 tries across URC and Heineken Champions Cup competitions this season. 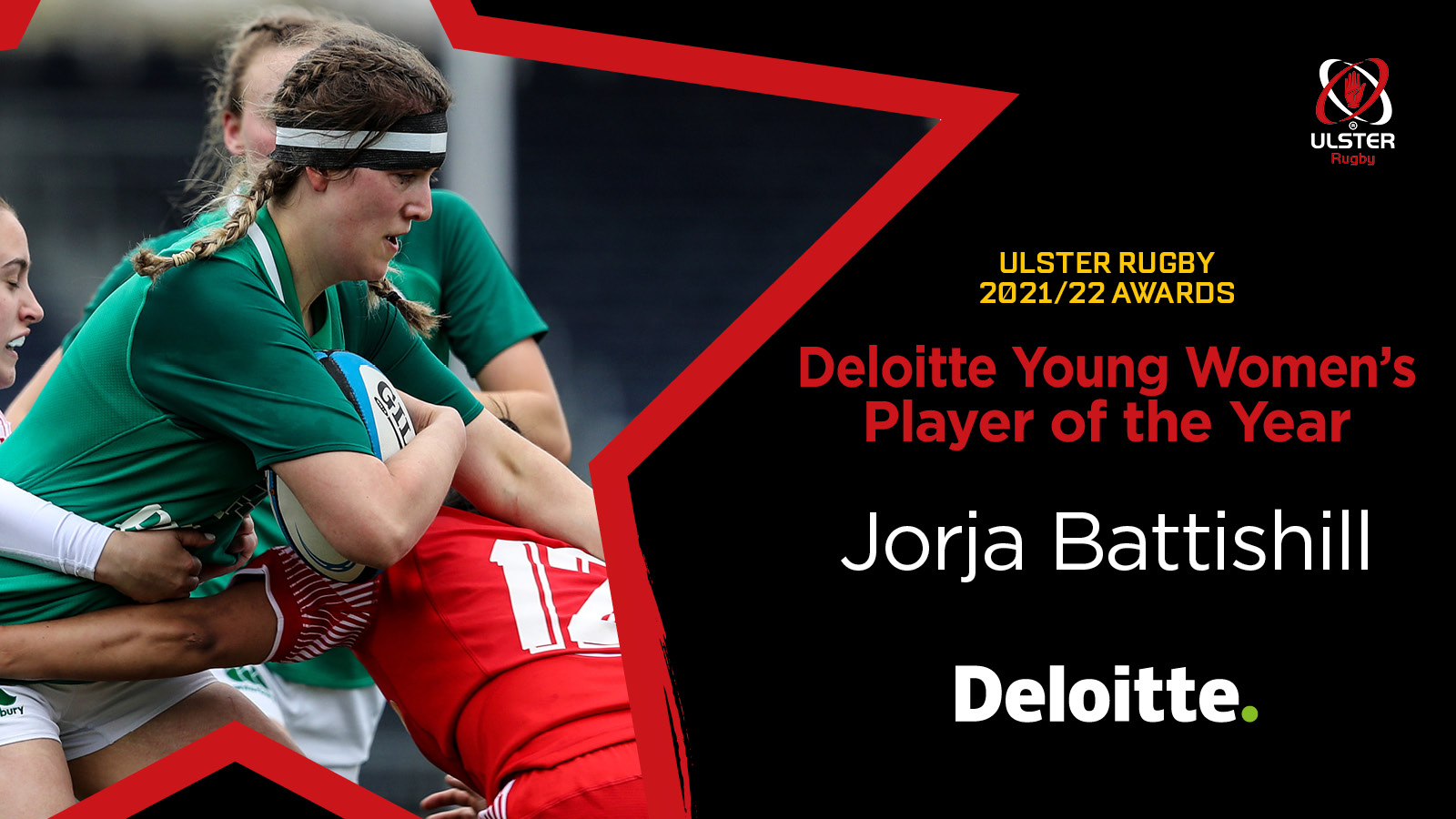 Jorja Battishill has gone from strength-to-strength over the past few years. Her dedication and drive have led to her selection on the international stage with the Ireland U18 Women’s squad. She has grown hugely over the past six months as a player and a person. She has become a real leader and has developed her athletic profile markedly over the last season.

Jorja will move to study at Gloucester University and continue her rugby journey while in England. 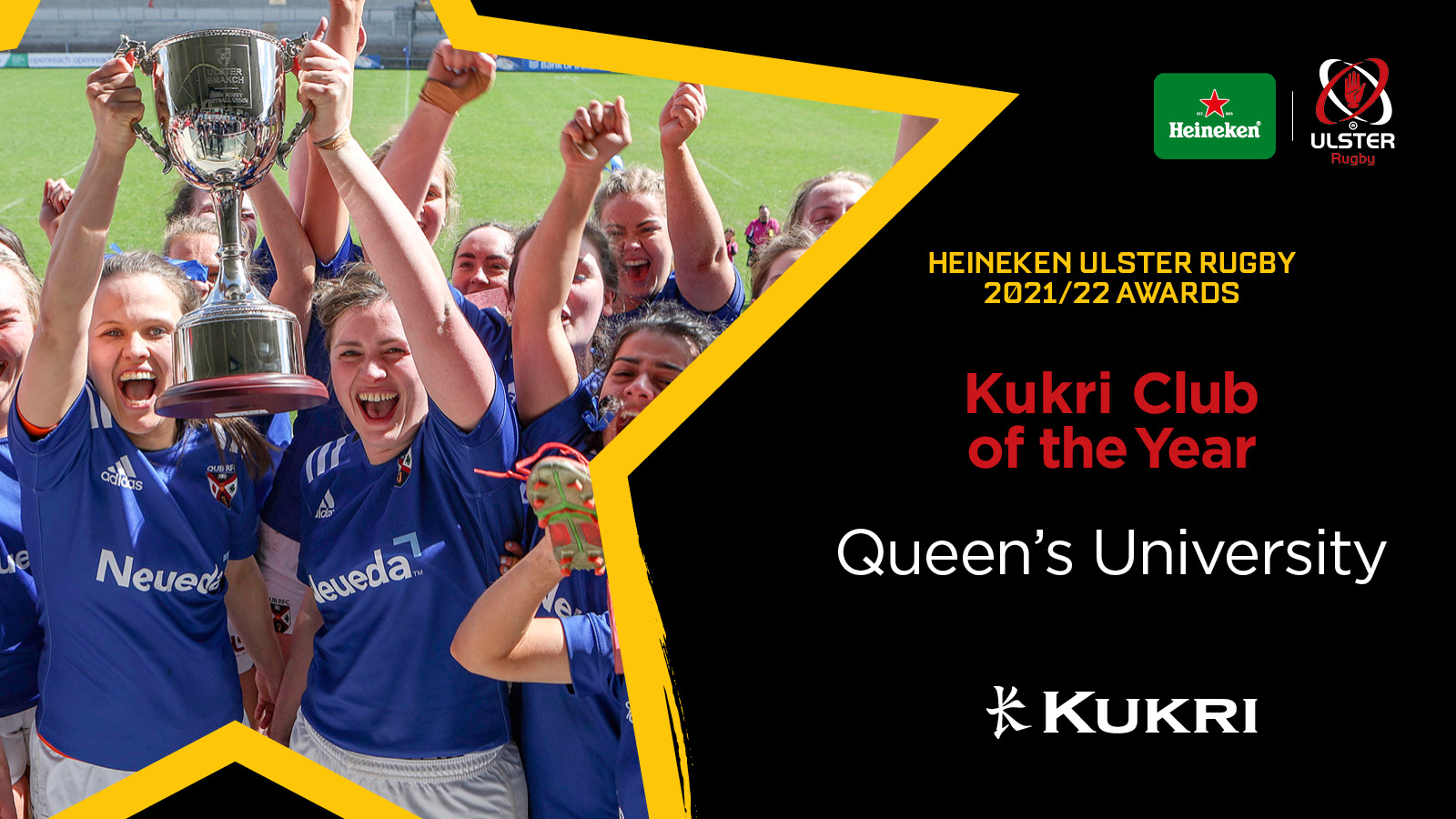 The Belfast university club has enjoyed huge success in the 2021-22 season, with both the men’s 1st XV and women’s 1st XV winning the blue riband Bank of Ireland Senior Cup and Deloitte Junior Cup competitions respectively. The men’s 3rd XV also claimed the Provincial East 1 and Provincial Regional Elite titles, and their 4th men’s side won the Regional East 2 competition. The university also clinched the IURU U20s Men’s Conroy Cup in a fantastic season for the club. 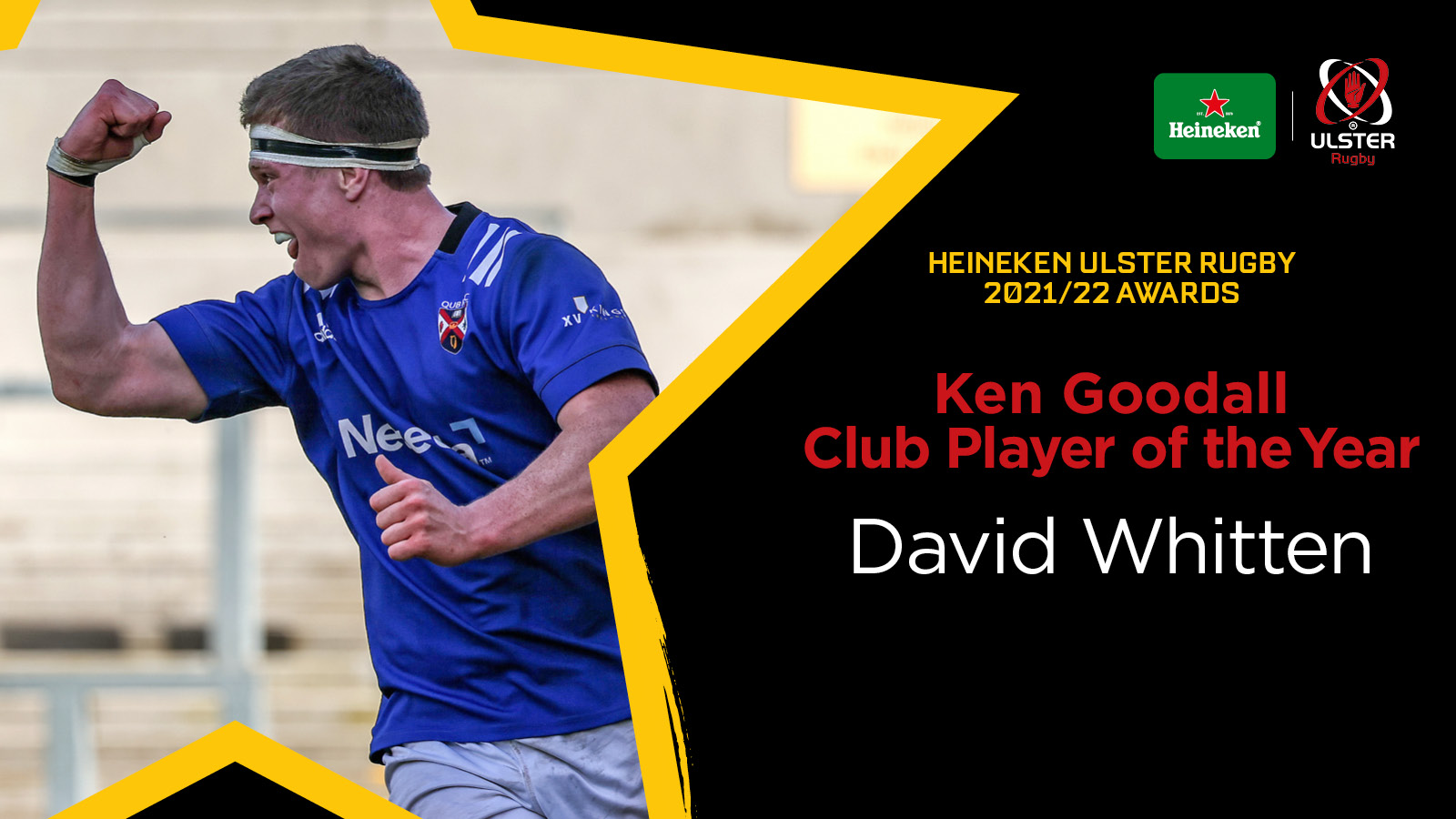 Queen’s University captain David Whitten led the Belfast side to the top of the Energia All-Ireland Division 2A, winning 15 games out of 18 this season. They were narrowly beaten in the promotion play-offs by Buccaneers, but Whitten and his team put that disappointment behind them in impressive fashion to clinch the Bank of Ireland Senior Cup for a record 24th time in the competition’s history.

In a successful season for the versatile forward, Whitten also collected the Energia AIL Division 2A Player of the Year Award last month, in recognition of his ball-carrying and outstanding work-rate. 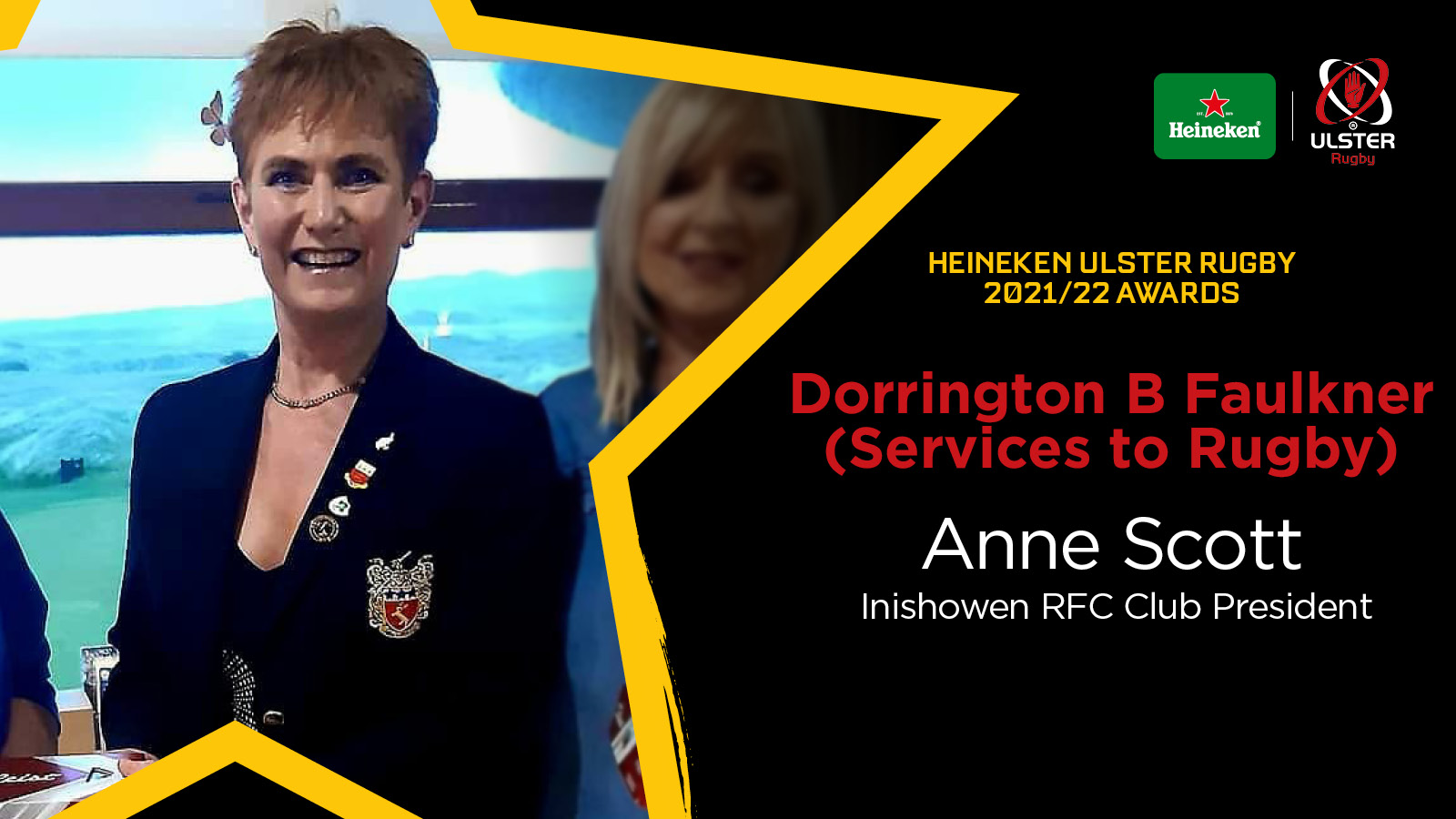 Anne Scott and Inishowen RFC have a long history dating back as far as the 1970s when she supported her late husband Stuart, who played for Ulster’s most northerly club. Hailing from the Lindsay family in Ballyclare, rugby was always in her blood.

She then played a vital role in the mini section of the club when her son, now a senior player, started out at U8 level. She has since carried out every job within the club and is known as the go-to woman, working tirelessly as Club President. From taking registration on training nights, to catering for the teams on a Saturday; from organising meetings and fund-raising, to supporting every team at each age grade, whether at home or away, Anne welcomes all visiting teams with the renowned Inishowen hospitality. The contribution she has made to the club and Ulster Rugby has led to her well-deserved recognition in the form of the Dorrington B. Faulkner Award. 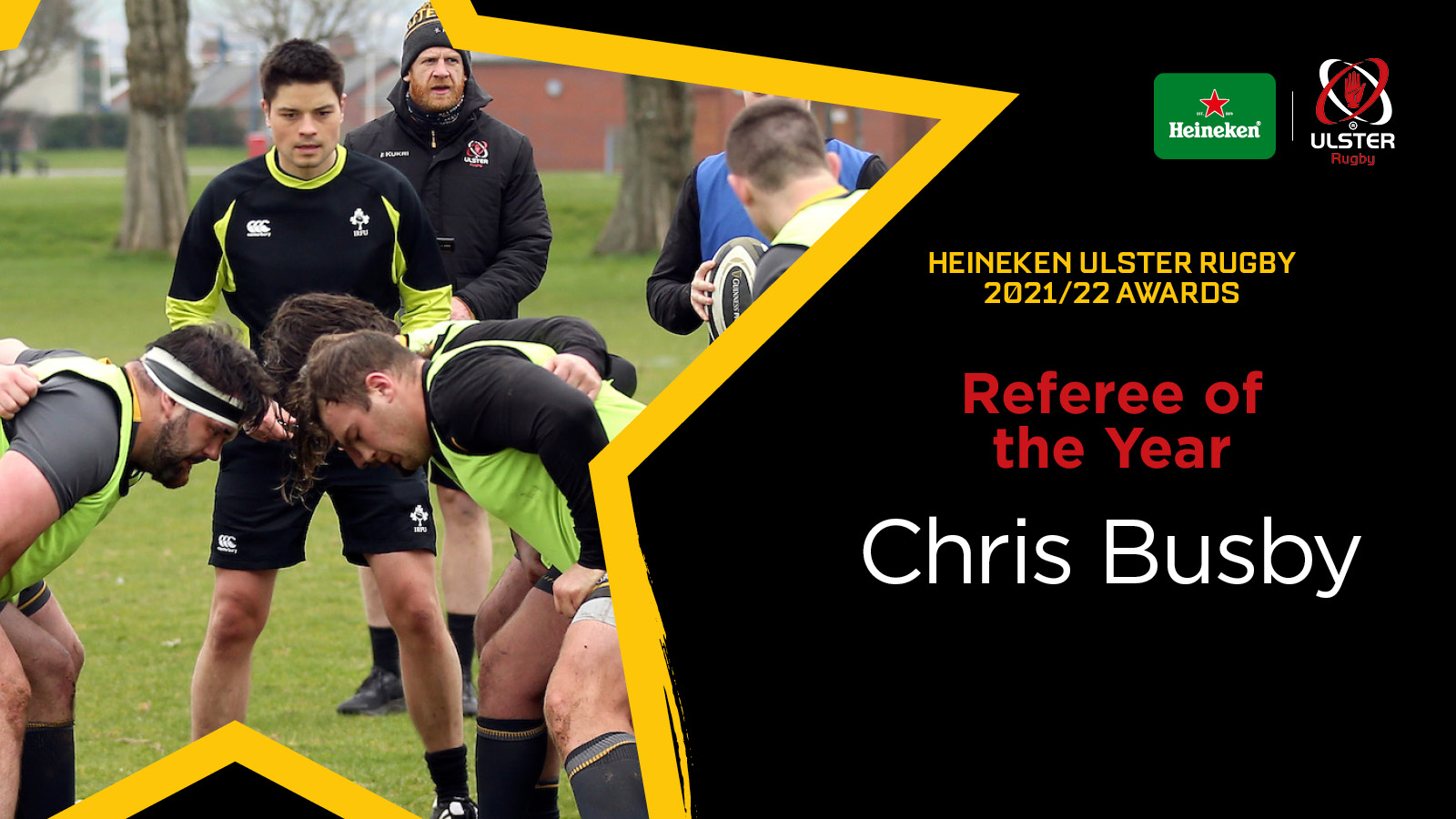 Referee of the Year: Chris Busby

Chris Busby from Ballyclare saw off strong competition to claim the Referee of the Year accolade for the third time in five years. Busby has represented the USRFR and IRFU officiating in the United Rugby Championship, Heineken Champions Cup and Challenge Cup competitions this season with a calm presence and strong communication skills. He also marked a fantastic season with his Assistant Referee debut in the Guinness Six Nations this year. 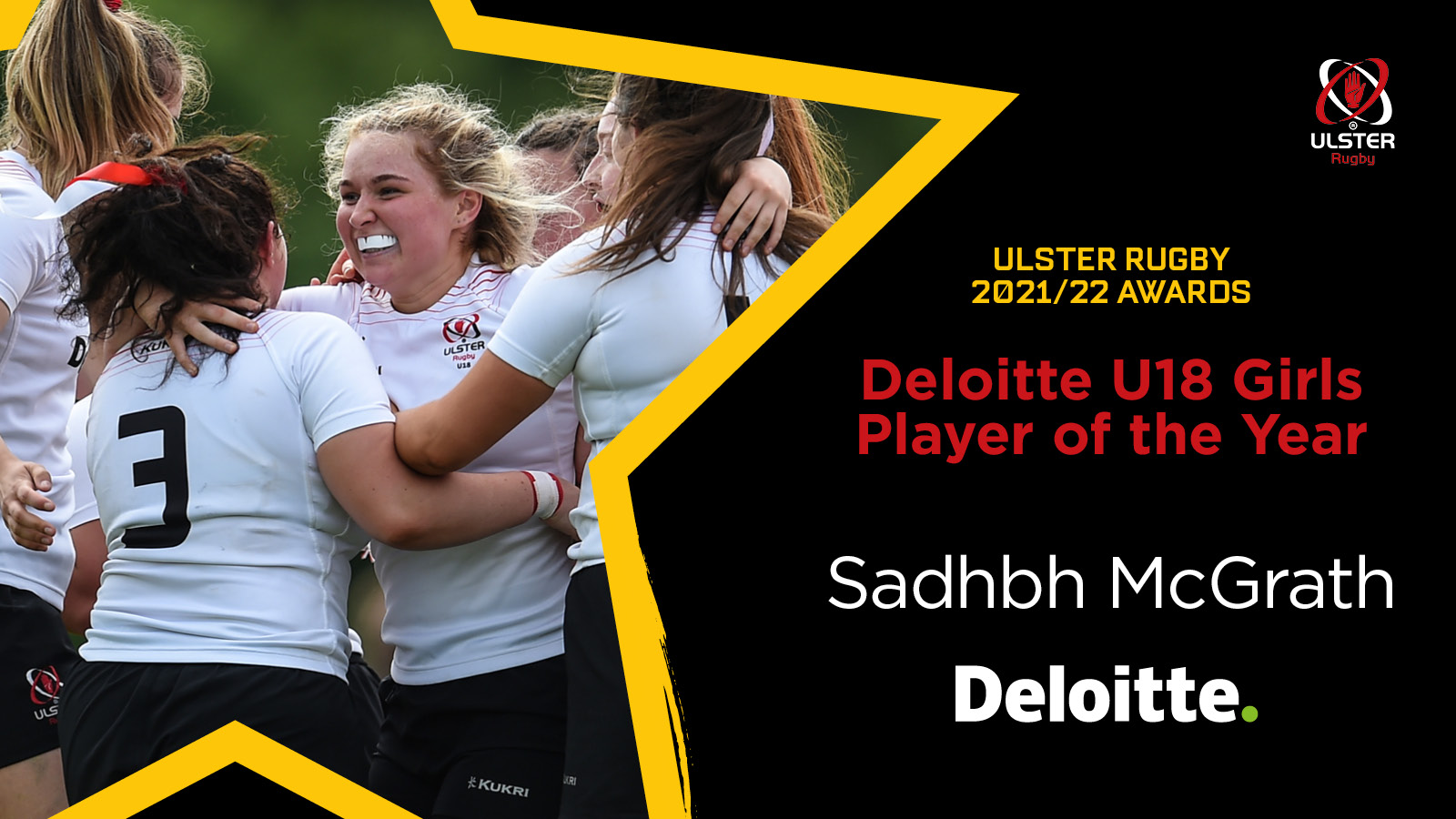 Deloitte Ulster U18 Girls’ Player of the Year: Sadhbh McGrath

Sadhbh McGrath impressed coaches from the outset of her rugby pathway. As a GAA player, she brought athleticism, physicality, and a tactical understanding of team sports.

As a person, she brings an infectious personality, positivity, and a desire to learn and improve. Her willingness to try a positional change saw her stand out not just in the Deloitte Ulster U18s team, but across the four provinces, resulting her being selected in the U18 Ireland Women’s squad for the inaugural Six Nations festival this season. 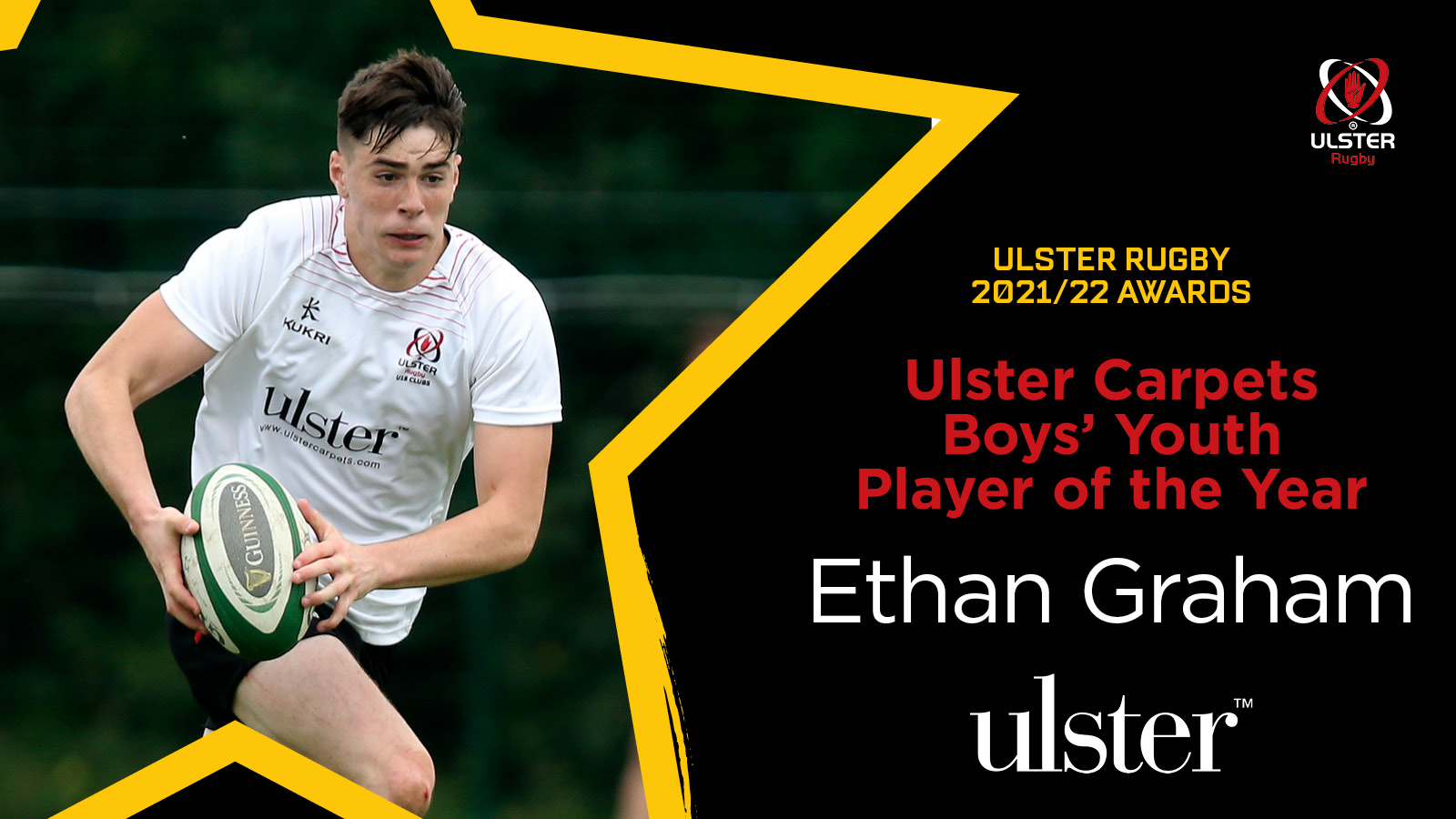 Full-back Ethan Graham had an excellent season representing Ulster U18s Clubs & Schools in the Inter-provincial campaign. His notable performances were rewarded and recognised in his selection for the Ireland U18 Clubs team versus Italy in October. He recently capped off a superb 2021-22 season by lining out for Ulster ‘A’ versus Munster last month. 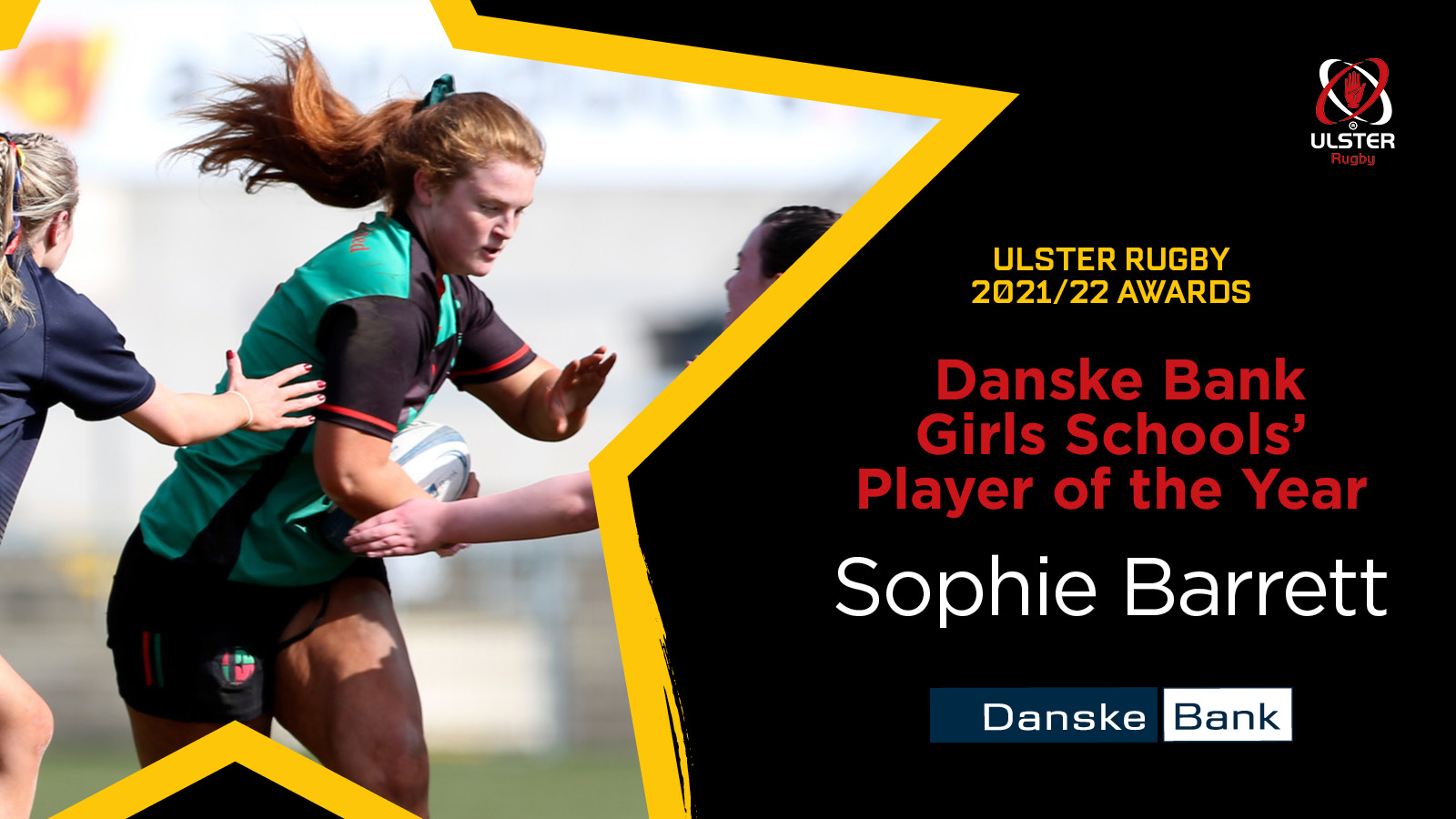 With her previous involvement in the Ulster U18 squad, Sophie brought experience and was a positive role model for her team, especially after her recent involvement in the Irish U18 squad for their Six Nations festival. Her determination, physicality and ambition led to her selection for the Danske Bank Girls Schools’ Player of the Year award. 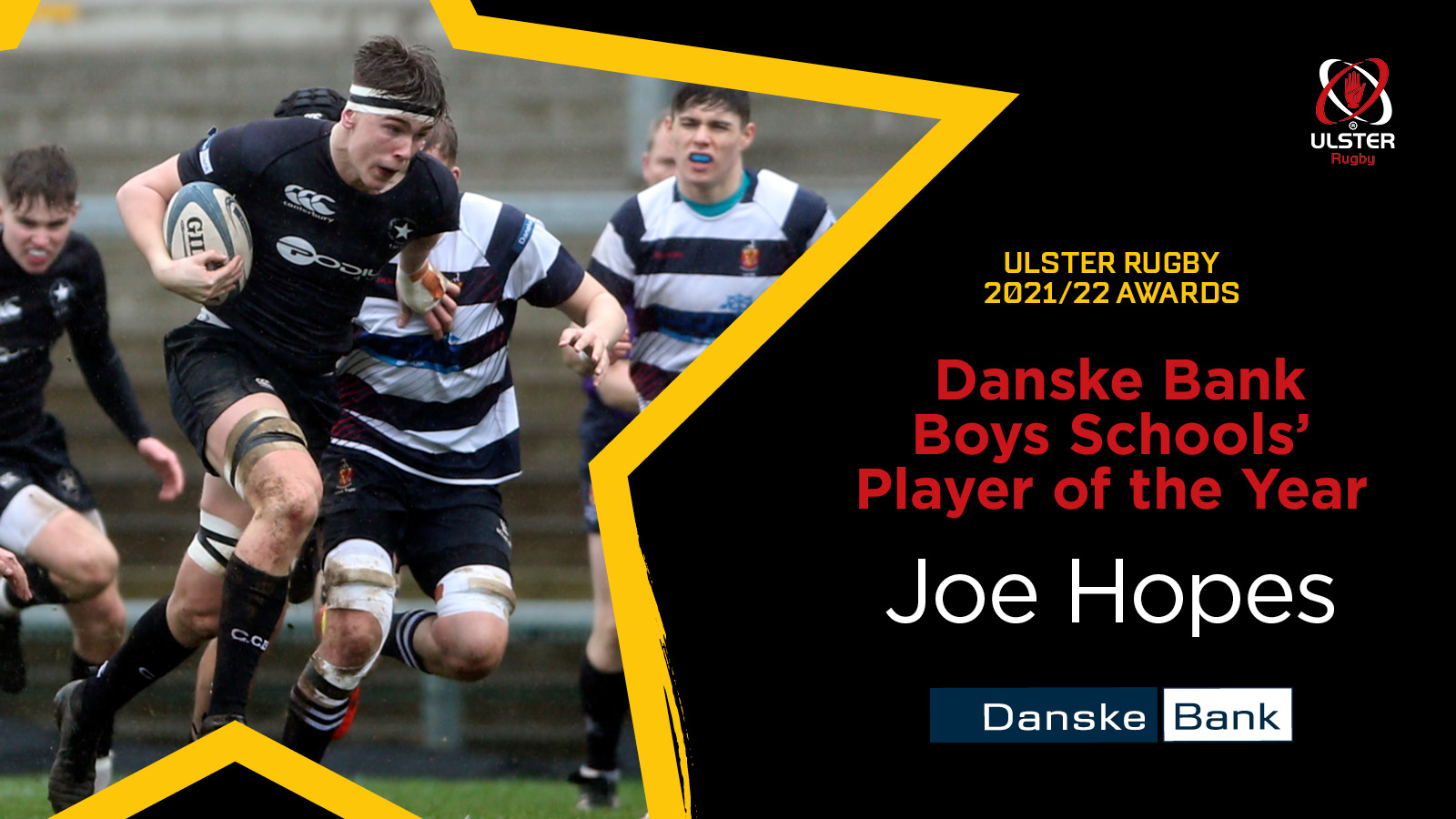 His impressive displays at lock have been rewarded with recent selection for the Ireland U18 Men’s Schools’ squad, where he started all three games in the U18 Six Nations Festival.