Behind the Player | Gemma McCamley

In our series, Behind the Player in association with Deloitte, Ulster’s Senior Women players share a little bit about themselves and their rugby careers.

Tell us a little about your rugby pathway to date.

I didn’t start playing rugby until I was 17 years old. I have a background in sport, so I grew up training in acrobatic gymnastics in my early teens. I held a few national titles competing with my sister and another girl, but I fell out of love with sport. It wasn’t really until I picked up rugby that my passion for exercise and getting involved in team sports was re-ignited. I played at Bangor RFC’s Under-18 set-up and had a fantastic coach, and I really loved the team but because I was 17, I grew out of underage rugby quickly. There wasn’t a senior setup at my local club, so I waited until I went to Queen’s University where I played for two years. That was an excellent introduction to development-level rugby and I learned a lot. After that, I felt it was time to challenge myself a bit more, so I moved to Malone RFC for two years. During the pandemic, I switched to Cooke RFC where I am now and I am really enjoying it. It was through Cooke that I got picked up by Ulster Rugby. I had a bit of exposure to the Ulster development squad in 2019 when I was playing for Malone, but first time I made it to the Inter-Provincial squad was when I was playing for Cooke.

Who have been your main influences on your rugby career? 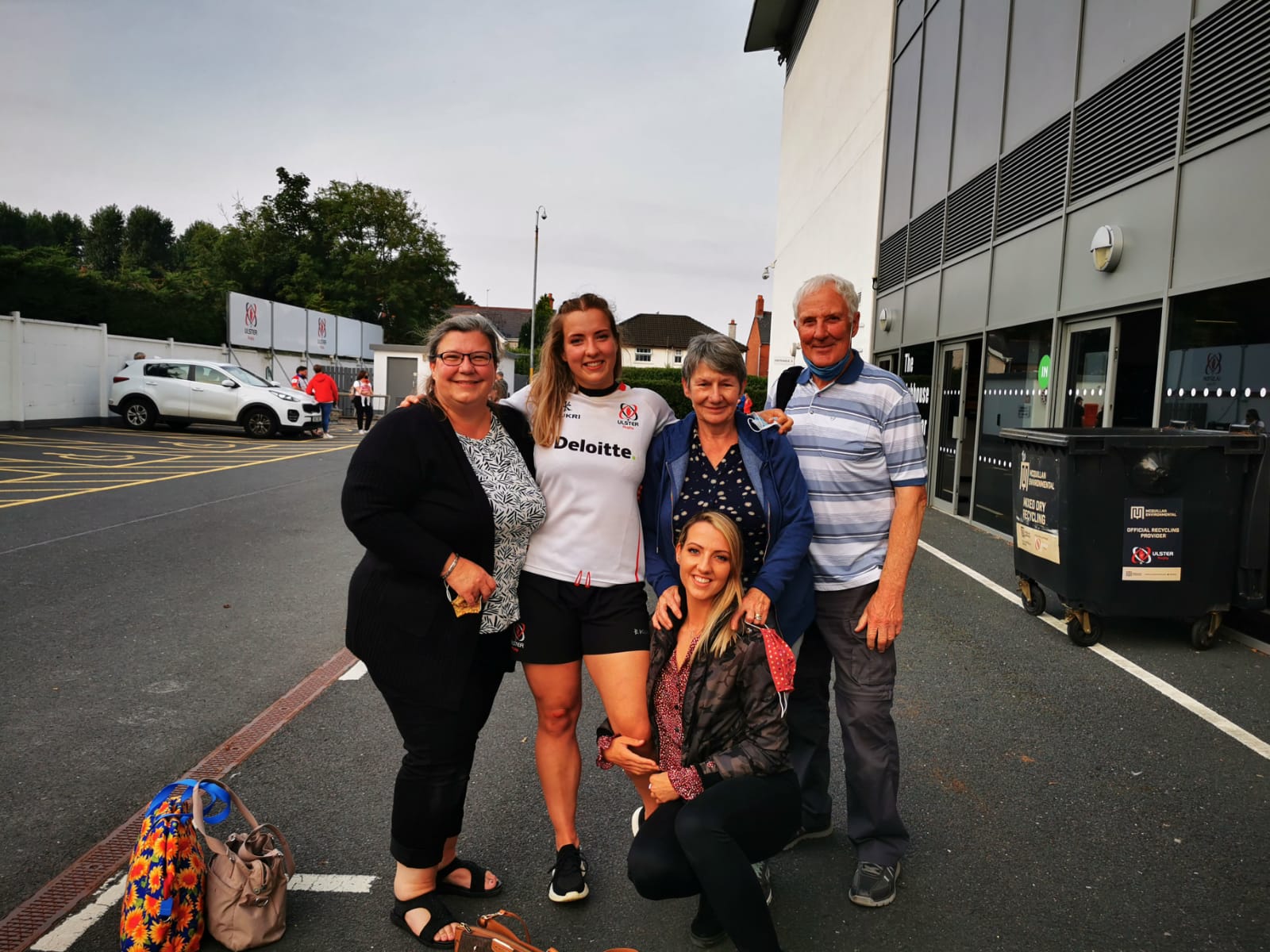 Gemma with her biggest fans

What barriers have you had to overcome to reach this point?

My biggest barrier to date has been consistency in terms of access to the right training and coaching at the right time. Because I came in at Under-18 level, I had limited time there and then had a year out because there was no senior set-up. That meant there were small delays in how I optimised my career. I picked up a shoulder injury at Queen’s which I’ve struggled with. Now coming into COVID, I found a great Strength & Conditioning coach, Phil Greenwood and am making lots of strides off the pitch. Rugby is as much an investment in outside training and bringing that to the sport. I was finally getting fit and in my first Ulster cap, I ruptured my ACL and am now in recovery for that. As much as these were barriers, I feel like continuing to test myself will only make the comeback stronger. It’s all about acknowledging the barriers and using them as a platform to drive yourself on.

It’s important to take the wins when you can get them. Coming to terms with being out for up to 12 months at a point when I was getting traction in my personal improvement was really difficult. You need to focus in on what you have and what you can do and continue to surround yourself by people in the rugby community. There are girls who have gone through the same thing and they understand the experience of being injured. It can feel isolating, but it’s an opportunity to reflect, improve and to give back to your team in other ways.

Tell us about your experience as part of the Ulster squad in the recent Inter-Pros.

I was invited along to train by Neill Alcorn (Head Coach). It’s one of those occasions when it’s so nerve-wracking turning up for that first session. There are a few faces you know will be there, but you don’t know who else has been invited. It’s a brilliant opportunity to meet and be surrounded by players of a similar level and experience. It’s a competition and it’s fantastic to go there and use each other to drive yourselves on. I found going to the Ulster set-up this year that as much as there was competition, we all wanted to see each other improve. We had the addition of Ashleigh Orchard (Baxter) this year and she brought some amazing experience. I always look up to Beth Cregan – she would be my rugby guru.

The set-up was brilliant. Even being able to connect with the coaches and having smaller numbers meant I could ask questions. I had access to S&C training with Diesel (Paul Heasley) which can help you when playing at club level too. I met Stacey Sloan in the Ulster set-up and I feel like we’re very like-minded. That is the joy of coming to Ulster – you find people who make you want to be better, and you want to push them on as well.

You made your first Ulster appearance at loosehead when you were typically a back-row before that – how did that come about?

I consider myself to be a jack of all trades – I’ve played everywhere in the back row and second row, a few short stints in the back line and did play briefly in the front row in my first year at Under-18 level as a tighthead. We had a training session with Eric O’Sullivan, who brought some brilliant experience to our scrum coaching. We were short of a front row player when we were doing 3-on-3 scrummaging, I stepped in to cover. I had a joke with Popcorn (Neill Alcorn) that I’d never play in the front row, but because I had done so much strength and mobility work, I was able to hold my own in the scrum and Eric asked where I could play because he said I fitted in well. It was a good opportunity to add feathers to my cap and Eric really took me under his wing. He taught me an awful lot about playing in the front row because there’s so much involved there. It was a new challenge and I really started to get to grips with the challenge of the scrum. I had so much help from the other Ulster-capped front rows; Sorcha (Mac Laimhin), Hanna (Harris) and Aishling (O’Connell) were so supportive and always gave me feedback and building up my beliefs. Ilse (van Staden) really put me through my paces too, she is a demon in the scrum so by the time it came to matches, I knew I wouldn’t come up against anyone like her.

Everyone wants a front-row who can scrummage like a front-row, but in open play can play like a back-row. I feel like I fitted into that box, so that’s how I ended up making the switch. It was a brilliant challenge and I was able to get to a position where I made my first cap as the starting loosehead. It was a phenomenal honour and a testament to Eric’s scrum training.

How did it feel to make your debut at Kingspan Stadium against Munster? 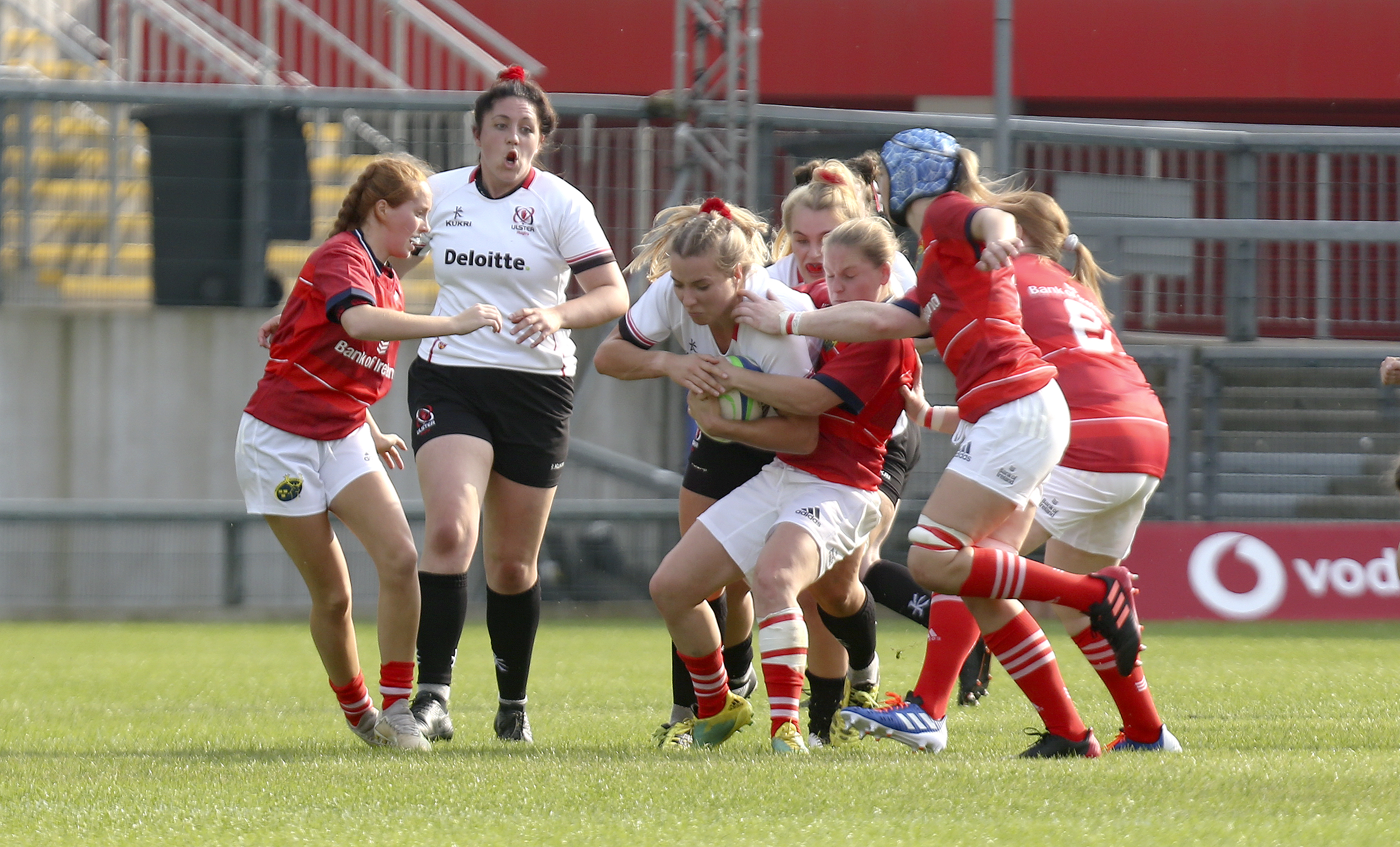 Gemma in action on her first Ulster appearance

There are a few factors in play. I believe a lot in intrinsic motivation. I’m my toughest critic but also my biggest driver. I really want to see what I can do to make myself the best I can be. That means trying to make myself as fit and strong as I can and trying to hone in on my weaknesses. I feel like you’re also driven by the people around you, so surrounding yourself with like-minded people who are strong-willed and want to see you do your best that feeds into your drive. Having the pleasure of working with my trainer, Phil Greenwood and my coach at Cooke (Daniel Allen) who put in those extra shifts and helped me work on my handling and tackling; being able to show them my improvements is what really motivates me to do well. 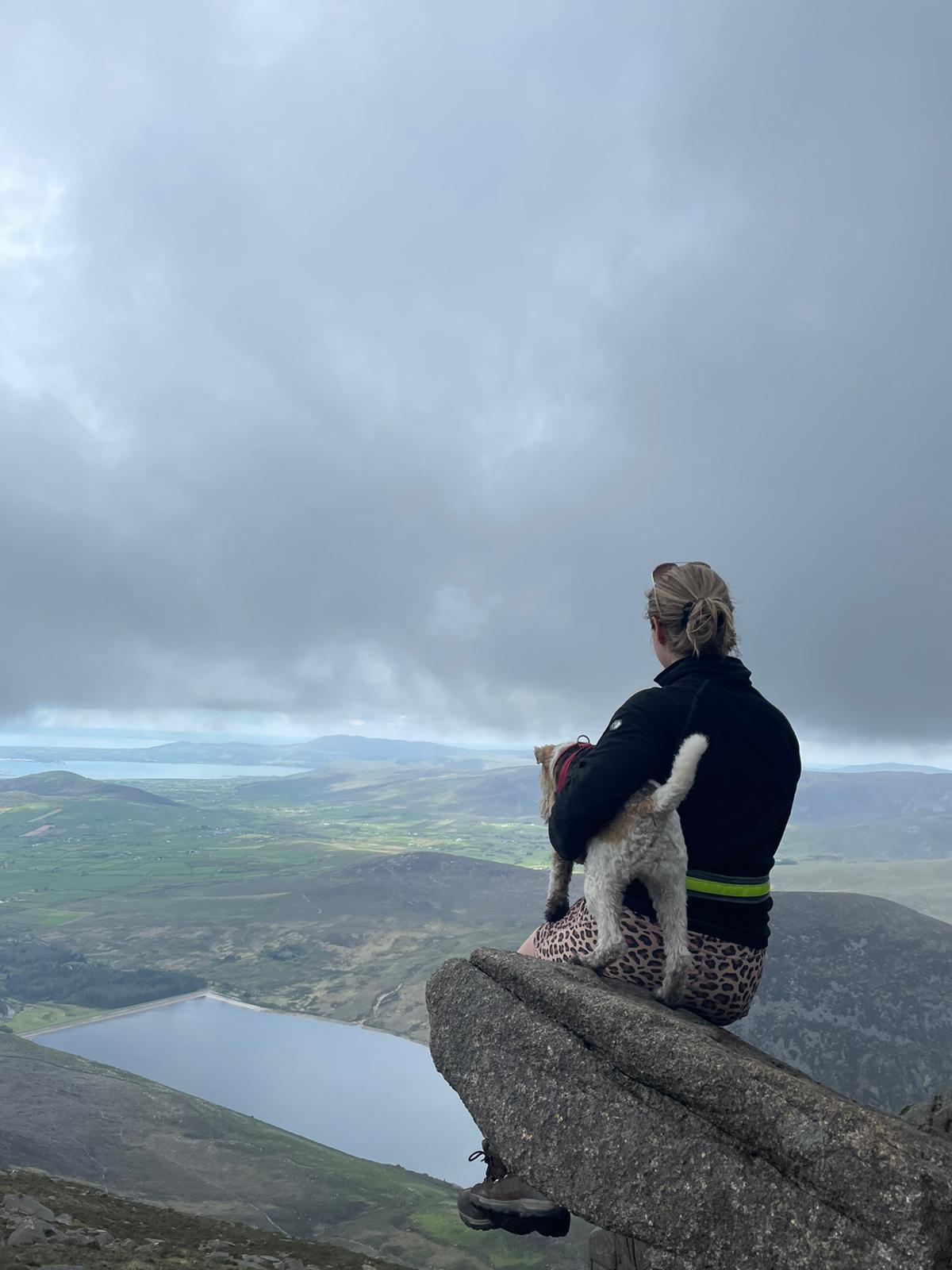 What has been the best advice you’ve received?

“Enjoy yourself and trust the process.” As I said, I’m my biggest critic and it’s really easy at interprovincial level to doubt yourself. It’s inherent in anyone’s game; if you don’t make the cut or don’t make a team sheet, it’s so easy to have those feelings of doubt. It’s important to take everything in, re-evaluate, put your head down to work hard and trust what you’re being told. Trust that your S&C coach has your strength in mind and your coach has the best advice for you. Don’t always take things at face value and work hard; you will get there. 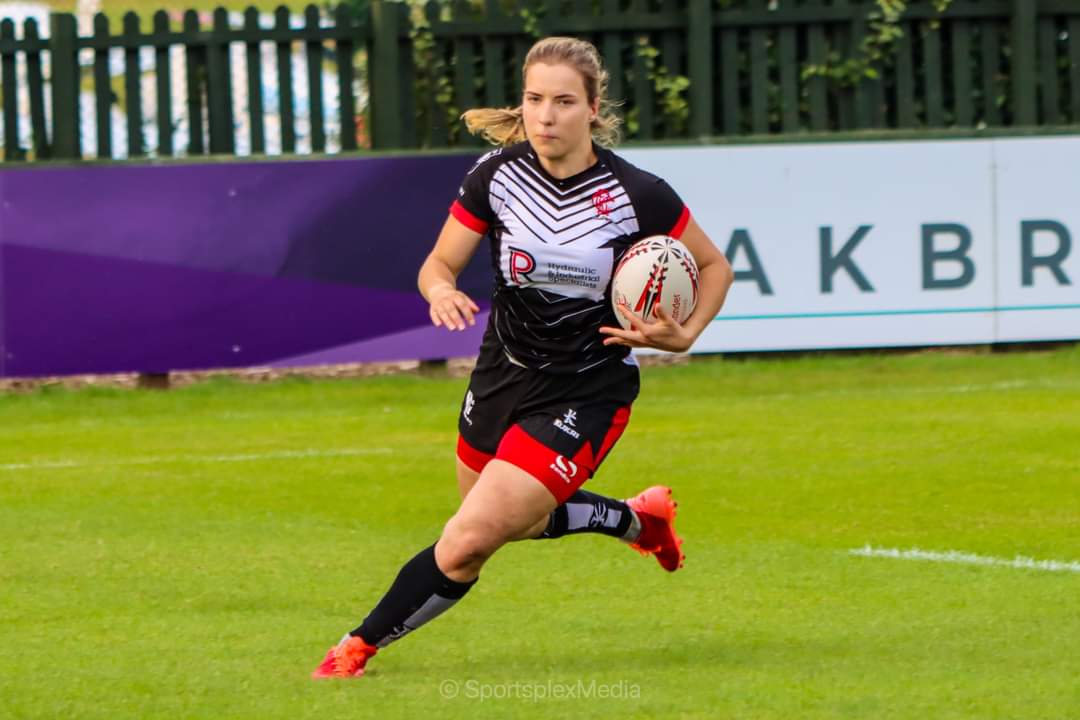 Gemma has played for Cooke RFC since 2020. Credit: SportsPlex Media

What have been your proudest moments in rugby?

Do you have a pre-match song you always listen to?

What are your rugby aspirations?

From where I’m at now with my ACL recovery, it’s to make a comeback, and to come back stronger. I’m taking this year out as an opportunity to work on my weaknesses from a rugby, strength and mentality standpoint. Mental toughness is a huge aspect of the game that isn’t always appreciated. Whenever I get my boots back on the grass, I will be stronger mentally and physically, and ready to take on whatever challenges come my way. Hopefully, I’ll line out in a white shirt again. That would be a huge honour to get back to Ulster and get more caps under my belt.