In the lead up to the fixtures on Saturday 17th two fixtures were played on Wednesday 14th September.

Rory Nugent and Isaac Nugent each scored a try for the Ballyclare High School team with Joel Flynn adding the extras to both scores.

Ballymena Academy fulfilled their previously postponed fixture against Wallace High School and recorded their second comfortable victory of the season-this time by 44-10.

Tristan Ferguson played out a “Man of the Match” performance for the Ballymena Academy team with two tries, two penalties and four conversions. Callum Mustoe scored two tries, as well, with Tom Mc Master and Conor Drain each touching down for one try.

Jack Shannon and Matthew Crowe each scored an unconverted try for the Wallace High School team.

On Saturday 17th September quite a few games were played.

Banbridge Academy hosted Larne Grammar School and won the game by 57-7. The Banbridge Academy points came through tries from Man of the Match, Noah Myles, who ran in for a hat trick, Connor Magee, who touched down for a brace, Darragh Knox, Jonny McCrum, Callum Little and Ryan Matthews. Ryan was successful also with six conversions.

The Larne Grammar school points came through a try from Ethan Anderson which was converted by Ethan Duncan.

The Portadown College points came through tries from Tyler Jackson, Max Boyce, and two from team captain, Scott Craig. John Speers was successful with all four of his conversion kicks as well as one penalty kick.

The BRA team found themselves 17-3 in arrears at the interval but staged a magnificent second half comeback to win the closely contested game by 18-17.

Henry George kicked the first half penalty for the Belfast Royal Academy team with Oliver Scott, Jacob Burton and Chris Sayers touching down for the second half tries.

The Royal School, Armagh team scored their points through tries from Lloyd Quinn and Ashton Clarke with Josh Watterson adding the extras to both tries as well as kicking one penalty.

The Dalriada School points came through two tries from Andrew Gilmore and Charles Verner with Gabriel Stubbs-Carton adding both conversions.

The Rainey Endowed School team scored five tries with Rossa Bell touching down for two and Matthew Booth, Owen O’Kane and Ethan Hobson each scoring one. Owen was successful with one conversion as well as one penalty kick.

The Friends’ School, Lisburn team scored three tries through Joel Barron, who was making his return from Ulster Age Grade duties, Samuel Dillon and Ethan Salt. The impressive Paddy Moore was successful with two of his conversion kicks.

The Cambridge House Grammar School points came through two tries from Josh Dobbin, one of which was converted by Dan Chestnutt.

The Foyle and Londonderry points came through a second half try from Oliver Allen which was converted by Finn Curtis.

The Omagh Academy team used an extended squad of players, a lot of whom were experiencing the challenges of 1stxv rugby for the first time. The Omagh Academy points came through two tries from Conrad Hale, one of which was converted by Andrew Johnston.

Unconverted tries from Jake Woods and Alex Howe gave the Enniskillen RGS team a 10-0 lead. The Regent House team recovered from the early set back to take a 12-10 lead into the break through two tries from the impressive Evan McGonigle, one of which was converted by Zach Campbell.

It was an evenly contested game in the first half with both teams scoring two tries, one of which was converted, to leave the scoreboard reading 12-12 at the break.

The Strabane Academy points came through two tries from Felix Foley, one of which was converted by Brian Browne.

Antrim Grammar School scored their first half points through tries from Josh Harvey and James Spence with Matthew Adair adding one conversion.

The Wallace High School points came through two Matthew Crowe tries with one conversion and one penalty from Charlie Beattie. 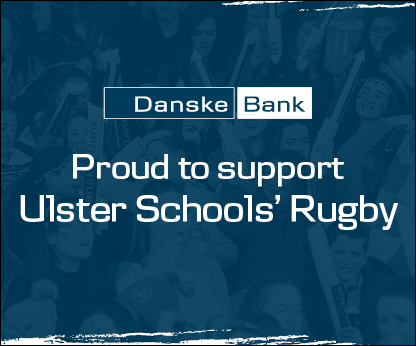